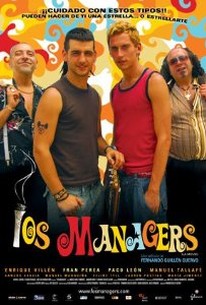 Fernando Guillen-Cuervo's comic road movie Los Managers (AKA The Managers, 2006) concerns Maca and Rena, two down-and-out hipsters who opt to fight unemployment by managing the singers David and Pipo in a televised vocal competition, and then coaching the men onto successful musical careers. The performers - promoted as Los Reyes del King - go on to play a series of low-class, sleazy dives, including pool halls, bingo palaces and bordellos. But then, La Rota turns up - a mysterious stranger who pays Maca, Rena, Pipo and David to mount a tour of the Costa del Sol. Thus begins a frenetic, picaresque odyssey, with the men encountering a series of eccentric and colorful characters on the road - everyone from adult movie starlets to nutty-as-hell marines to Tom Jones impersonators to extraterrestrials. ~ Nathan Southern, Rovi

There are no critic reviews yet for Los Managers. Keep checking Rotten Tomatoes for updates!

There are no featured audience reviews for Los Managers at this time.