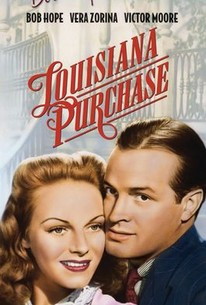 The Irving Berlin-Morrie Ryskind Broadway musical hit Louisiana Purchase came to the screen with surprisingly few emendations in 1941. Bob Hope replaces Broadway's William Gaxton in the role of innocent political flunkey Jim Taylor, set up to take the fall for wholesale graft by a group of corrupt Louisiana politicians. Taylor's friendly adversary is bumptuous U.S. senator Loganberry (Victor Moore, repeating his stage role), whose efforts at reform only end up getting him in hot water as well. Loganberry solves his own problems by marrying Mme. Bordelaise (Irene Bordoni), the temptress who'd been sent out to place him in a compromising position, forcing Taylor to straighten out the mess himself in a hilarious climactic courtroom filibuster. ("If it's good enough for James Stewart, it's good enough for me.") Some of the satirical bite of the Broadway version had to be blunted for movie-audience consumption, though Paramount managed to avoid potential lawsuits by using a device which originated in the play: an amusing opening "opera bouffe" wherein it was established beyond all doubt that Louisiana was a totally mythical state! (At one point, a bevy of chorus girls sing the "any resemblance to actual persons living or dead" disclaimer.) On a historical note, Louisiana Purchase was Bob Hope's first Technicolor appearance.

Robert Warwick
as Speaker of the House

There are no featured audience reviews for Louisiana Purchase at this time.