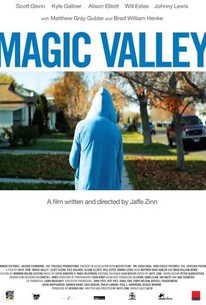 The death of a young woman sends ripples through a small Idaho town in this independent drama. Susan is a teenager who is found dead in a field by two young boys who live in her neighborhood (Landon Abercrombie and Daniel Frandson), who then decide it's up to them to bury the body. Susan's mother, Martha (Alison Elliot), has been fussing over her ailing dog and hasn't noticed yet that her daughter is missing. Martha's husband Jerry (Brad William Henke) recently stocked their pond with trout, but is now waging a war of words with his neighbor, who has changed the course of the stream that fed the pond, leaving the fish to die. The local sheriff (Scott Glenn) is too busy obsessing over his favorite television shows, shooting pheasant and pestering his deputy (Will Estes) to pay much attention to reports of missing persons. And TJ (Kyle Gallner) is haunted by the knowledge of a dangerous incident that had deadly implications. Magic Valley was the first feature film from writer, director and editor Jaffe Zinn.

Will Estes
as Jimmy Duvante
View All

There are no critic reviews yet for Magic Valley. Keep checking Rotten Tomatoes for updates!

There are no featured audience reviews for Magic Valley at this time.