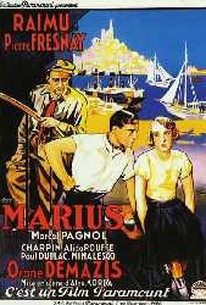 In this touching romance, the first in Marcel Pagnol's Marseilles trilogy (the other two being Fanny and Cesar, Pierre Fresnay stars as Marius, a young man tending bar who dreams of a life at sea. Because he so desires to become a sailor, he cannot commit to marriage even though he loves Fanny (Orane Demazis). When the rich Honore Panisse (Charpin) proposes to Fanny, Marius becomes enraged, but still refuses to ask for her hand. At the bar, Fanny confesses her love for him and tells Marius she has rejected Honore's proposal. Marius admits his love for her as well and they retire to a back room to make love. When Marius is told a spot has opened up on a departing ship, he declines to sign on, not wanting to leave Fanny, but he still refuses to marry her. Fanny overhears the conversation, and not wanting to hold Marius back from the life at sea he so desires, tells Marius she has changed her mind and accepted Honore's proposal. Heartbroken, Marius rushes to pack and catch the departing ship. ~ Paul Brenner, Rovi

Edouard Delmont
as The Second Mate

Marcel Maupi
as The Stoker

There are no featured audience reviews for Marius at this time.