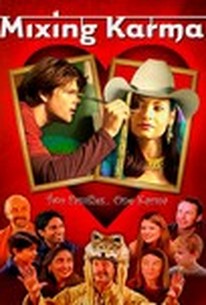 A girl from a traditional Indian family falls for a free spirited artist who's struggling to find his footing after facing rejection at every turn. Much to the dismay of his rugged father, Ryan has always wanted to be an artist. Despite receiving no support from his own family, however, the aspiring painter does receive some encouragement from the kindly Indian family who live across the street. But while Ram, the family patriarch, believes that art may be Ryan's destiny, an unexpected development soon rocks his household to the very core. Ram's daughter Priya has fallen in love with Ryan, and the thought of his little girl marrying a man who works as a dishwasher is nothing short of heartbreaking for the fiercely protective father. But later, just as Ryan begins to reconsider his lifelong ambition to be an artist, his dysfunctional older brother John reveals a secret that could save his brother from watching his dreams go up in smoke.

There are no critic reviews yet for Mixing Karma. Keep checking Rotten Tomatoes for updates!

There are no featured audience reviews for Mixing Karma at this time.