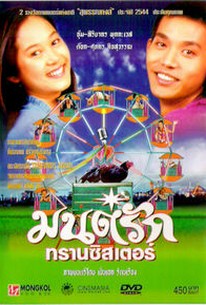 Pen-ek Ratanaruang's Mon-Rak Transistor is part of a mini-wave of Thai films that have won acclaim on the film festival circuit in recent years. Pan (Suppakorn Kitsuwan), a young man with dreams of pop stardom, enjoys a simple life with his new wife, Sadaw (Siriyakorn Pukkavesa), in their country village. The two are separated, however, when Pan is drafted into the army. Unhappy on the front, Pan soon goes AWOL to join a pop music troupe and pursue his dreams of becoming a singer. Meanwhile, the pining Sadaw manages to track her husband down just as he gets his big break. Their reunion proves short-lived when a mishap forces Pan to go on the run from the law. After a detour working at a sugar cane farm, Pan ends up begging on the streets of Bangkok and eventually lands in jail. Having all but given up on Pan, Sadaw falls for the charms of a traveling salesman. Years pass and Pan is finally released from prison. Chastened by his experiences in the city, he returns home to Sadaw for an unexpected and tearful reunion. Featuring songs by Surapol Sombatcharoen, a popular Thai country singer from the 1960s, this bittersweet musical comedy won several Thai film industry awards in 2001.

There are no critic reviews yet for Mon-Rak Transistor. Keep checking Rotten Tomatoes for updates!

There are no featured audience reviews for Mon-Rak Transistor at this time.