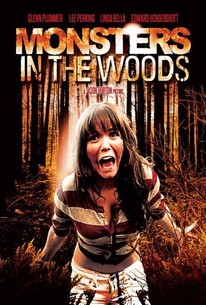 Monsters in the Woods

A deal with the devil leads to bloodshed on the set in this independent horror film about a low-budget filmmaker determined to succeed. Upon completing his vision of the perfect film, director Jayson (Glenn Plummer) is told that his movie doesn't have enough sex and violence to sell. Dejected but determined to succeed at all costs, he convinces his unstable producer Bravo (Blaine Cade) to round up a crew for reshoots in the Great Bear Mountains. With a cast including fearless stuntman Burt (Edward Hendershott) and pretty aspiring starlet Ashley (Linda Bella), the filmmakers set out to give their film and exploitive edge, and rake in the cash. When Jason is later killed during production, Bravo convinces the cast that the director would have wanted them to go on without him. And so they do. But little does the cast realize that Bravo has sold his soul in exchange for success and that in order to fulfill his end of the bargain he must sacrifice twelve souls to the Devil himself. Meanwhile, as the Devils minions emerge to collect their souls, two angels descend from heaven on a mission to protect the innocent, and fight Satan's rampaging demons back to the gates of Hell. ~ Jason Buchanan, Rovi

Critic Reviews for Monsters in the Woods

There are no critic reviews yet for Monsters in the Woods. Keep checking Rotten Tomatoes for updates!

Audience Reviews for Monsters in the Woods

There are no featured audience reviews for Monsters in the Woods at this time.

Monsters in the Woods Quotes