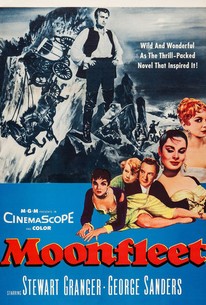 In the 1750s, young orphan John Mohune (Jon Whiteley) arrives at the seaside Dorset village of Moonfleet seeking Jeremy Fox (Stewart Granger), a one-time "friend" of his late mother, to whom she has turned over care of the boy. Fox exudes an aura of class and bravado, along with an obvious love of life and the finer things it can offer, all of which combine to make him a beguiling presence to one and all, including the larcenous, decadent local nobility (George Sanders) and a band of cut-throats led by Elzevir Block (Sean McClory), to whom he has more than a passing acquaintance. In his innocence, John -- oblivious to the fact that Jeremy runs a murderous smuggling ring -- instantly accepts this man as a loyal friend (and, indeed, a man to be loved and trusted like a parent, precisely because his mother has consigned him to his care). And Jeremy, initially disdainful of the boy, finds himself moved by the latter's willingness to love him and see his better nature, which does come out (with some resistance) under his coaxing, and reluctantly becomes his guardian. But there are too many nefarious goings on in and around Moonfleet, between smugglers and the authorities pursuing them, and the Mohune family's dark history, to keep John safe from danger. His life is placed at risk when he stumbles on the secret of old "Redbeard," the Mohune patriarch who betrayed law and morality, selling his soul for a priceless diamond, which has long been believed lost. Before long, young John knows too much about the smugglers for their comfort, despite Jeremy's protection -- and when he accidentally discovers a clue to the location of Redbeard's diamond, even Jeremy can't resist the chance for that prize, even if he has to cheat the boy out of his birthright.

Peggy Maley
as Tenant
View All