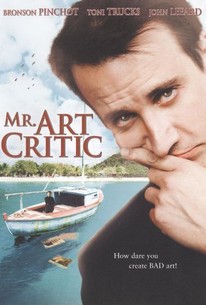 A Chicago art critic with a notorious nasty streak retreats to his Mackinac Island cottage for a brief getaway, only to get stuck in a wager with one of the artists he recently trashed in a particularly mean-spirited review. M.J. Clayton (Broson Pinchot) doesn't necessarily shrink from controversy; in fact, readers all across the country are familiar with this brutal form of journalistic sadism. Scolded by his publisher after a series of venomous reviews, Clayton retreats to his Mackinac Island cottage and wanders over to the bar for a few drinks. There, Clayton is confronted by Frank (John Lepard), a struggling artist whose latest show was prematurely pulled from a popular gallery as a direct result of the critic's unkind words. Emboldened by an intoxicating mix of beer and liquor, Clayton bets Frank that he can prove how easy it is to make great art; an impulsive challenge that he immediately regrets upon waking up with a bad hangover the following morning. Now, as Clayton attempts to make good on his wager by using some quality art supplies furnished by Frank, he discovers to his dismay that he has absolutely no artistic talent. At the opening of the annual art festival Clayton learns that he has become something of a local celebrity. But while the last thing he wants to do right now is deal with fans and detractors, the announcement that he has been fired from the newspaper leaves his desperate to make some quick cast. The top prize in the festival is $10,000, and though Frank doesn't possess the talent needed to win the jackpot there is a local artist (Toni Trucks) who does. After quietly purchasing the humble artist's best painting, Clayton slyly enters it into the competition as his own.

There are no critic reviews yet for Mr. Art Critic. Keep checking Rotten Tomatoes for updates!

There are no featured audience reviews for Mr. Art Critic at this time.