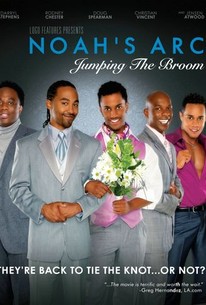 The popular Logo series about the lives and loves of four gay African-American men gets the feature-film treatment with this road movie that finds longtime friends Noah, Alex, Ricky, and Chance traveling to Martha's Vineyard with their significant others for a weekend wedding retreat. Aspiring Los Angeles screenwriter Noah (Darryl Stephens) and his partner, Wade (Jensen Atwood), are about to be married in an intimate Martha's Vineyard ceremony, and to celebrate in style Noah has invited Alex (Rodney Chester), Ricky (Christian Vincent), and Chance (Douglas Spearman) to join the couple on a cross-country road trip from California to Massachusetts. However, the trip is far from the relaxing getaway that Noah had hoped for, because along the way secrets are revealed, hearts are bruised, and friendships are put to the ultimate test. Not only are Chance and Eddie beginning to feel the urge to scratch their seven-year itch, but playboy Ricky has a secret that's sure to rock everyone's world, and the appearance of a surprise visitor quickly threatens to overshadow the main event. Add a closeted rapper and a high-maintenance studio executive into the mix, and you've got the recipe for an endearing romantic comedy that's as poignant as it is hilarious.