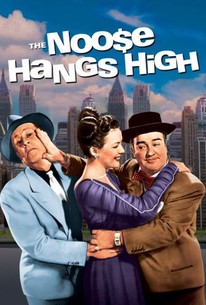 For their first independently-produced vehicle, Bud Abbott and Lou Costello chose to appear in a remake of the 1939 Universal programmer For Love or Money. Bud and Lou are cast as Ted and Tommy, two bumbling window washers hired by gangster Mike Craig (Joseph Calleila) to collect a $50,000 gambling debt. The boys manage to pick up the money, only to deliver it to the wrong person, a pretty private secretary named Carol (Cathy Downs). Ordered to retrieve the money within 24 hours "or else," Ted and Tommy trace the cash to Carol, who has mistakenly distributed it amongst the entries in a mailing list. As our heroes desperately concoct methods of escaping Craig's wrath, eccentric gambler Julius Caesar McBride (Leon Errol), the man who "never loses," comes to the rescue. Despite its seeming complexity, the plot exists merely as a peg on which to hang several of Abbott and Costello's best routines, including "Bet you 10 dollars you're not here," "Hole in the Wall," "Packing and unpacking," "Getting Arrested," and, best of all, "Mudder and Fodder." Beyond the seven credited actors, the huge unbilled supporting cast includes such reliable laugh-getters as Benny Rubin, Murray Leonard, Elvia Allman, Herb Vigran, Fred Kelsey, James Flavin, Lyle Latell, Isabel Randolph and Paul Maxey.

Louis Austin
as Woman on Street

Lois Austin
as Woman on Street

Herb Vigran
as Man with Coat

Elvia Allman
as Bit
View All