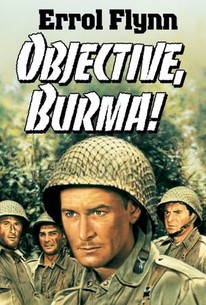 A few corny moments aside, Objective Burma must rate as one of the best combat films of WW2. Errol Flynn stars as Captain Nelson, who leads a hardy band of paratroopers behind enemy lines in Burma, for the purpose of destroying a Japanese radar station. Their mission accomplished, Nelson and his men prepare to make their escape by plane, but this proves to be impossible. It is therefore necessary for the surviving paratroops to make a grueling 150-mile journey by foot through the Japanese-held jungle, in hopes of eventually reaching their own lines. With the exception of Henry Hull, who delivers a mannered, strained performance as an Ernie Pyle-like war correspondent, the performances are uniformly excellent, with Flynn, George Tobias and William Prince standing out. Director Raoul Walsh and cinematographer James Wong Howe stage the combat scenes (filmed on the "Lucky" Baldwin Santa Anita ranch) with brutal efficiency, showing little but conveying a lot in the way of gore and carnage. The strangest sequence (at least to modern viewers) has the paratroopers expressing horror and disgust at a vicious sneak attack by the Japanese-which occurs only a few reels after the Americans have staged an equally merciless attack on a Japanese unit! In England, Objective Burma was taken to task by newspaper journalist who felt that the Americans were unfairly taking full credit for the success of the Burmese campaign. The ensuing hue and cry compelled Warner Bros. to issue an apology, and to withhold the British release of the film until 1952, at which time it was accompanied by a lengthy prologue title extolling England's contribution to the Burma invasion. Originally released at 142 minutes, Objective Burma is usually shown on TV in its 128-minute reissue form. ~ Hal Erickson, Rovi