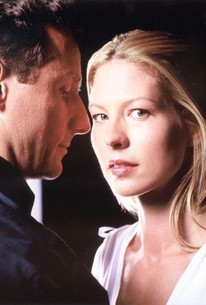 Based on a true story, Obsessed begins when Ellena Roberts (Jenna Elfman), a highly successful medical writer, is yanked out of her apartment and arrested on a charge of harrassment. It seems that Roberts has been dogging the trail of famous neurosurgeon Dr. David Stillman (Sam Robards), whom she met during a medical convention. According to Ellena, she and the very married Stillman had a torrid affair, whereupon Stillman promised to divorce his wife and marry her. When Stillman denied these charges, Ellena inaugurated a campaign of psychological warfare to reclaim the doctor for herself, going so far as to break into his house in the dead of night. The subsequent court trial boils down to a matter of he said/she said, with the neurotic but quick-witted Ellena certain that she can sway the jury to her favor -- even though her own attorney (Kate Burton) suspects that Ellena has merely imagined the entire affair. Much of the story is related through the conversations between Ellena and a fiercely feminist journalist (Lisa Edelstein), whose devotion to Ellena borders on the surreal. Something of a cross between Fatal Attraction and A Beautiful Mind, the made-for-cable Obsessed originally aired September 16, 2002, on the Lifetime network.

Giancarlo Cattabiano
as Ozzy
View All