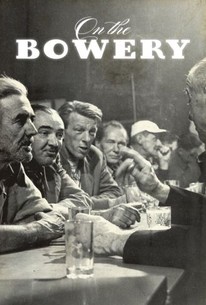 On the Bowery Ratings & Reviews Explanation

On the Bowery Photos

New York, the 50s, stark, sharp, beautiful black and white: men sleeping on the street, on park benches, in doorways (one reading an old Esquire stretched out on a pushcart); men being rousted by the cops, being kicked out of bars, arguing at the top of their lungs; men listening to patently sincere pep talks from recovered drunks at the mission, marking out their spots on the floor for the night with newspapers, looking up through the chicken wire ceilings over their beds at the flophouse: three days in the life of straight-from-the-road Ray Salyer, still good-looking and well spoken, a new arrival on the Bowery. Taken in hand by old-timer Gorman Hendricks, a puckishly charming bull slinger, Salyer goes on two benders, quits twice, hops on a truck for a day job, but finally states, "Me, I only care for one thing." Wealthy scion of a major fabrics firm (and later owner/operator of the Bleecker Street Cinema), Lionel Rogosin found himself drawn to world injustice, then, starting close to home, spent six months hanging out on the Bowery and environs (parts of which included today's SoHo), often under the tutelage of Hendricks, a cirrhosis of the liver sufferer who held off from a fatal last bender until the end of filming. Shooting for four months with cameraman Richard Bagley (The Quiet One), Rogosin staged scenes improvised from a sketchy story line, alternating with sequences taken by hidden cameras - all with non-professional Bowery denizens. The result: Best Documentary, Venice Film Festival and an Oscar nomination for Best Documentary Feature, along with critical attacks from the likes of Bosley Crowther and Clare Booth Luce for showing the dark side of America. --© Film Forum

Critic Reviews for On the Bowery

Audience Reviews for On the Bowery

On the Bowery Quotes