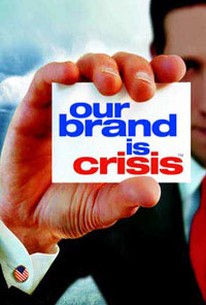 Our Brand Is Crisis

Riveting and enraging, Our Brand Is Crisis peers behind the curtain of modern political campaigning and reveals a story that should be seen by citizens of all persuasions.

Our Brand Is Crisis Photos

An adventure following James Carville and a team of U.S. political consultants as they travel to South America to help Gonzalo Sanchez de Lozada (a.k.a. 'Goni') become president of Bolivia. Goni, is seen by his American strategists as a progressive idealist trying to liberalize business practices and strengthen democracy. However, to many Bolivians, he is a Clintonesque neo-liberal allied too closely with the U.S. With little chance of re-election. Starting with a country in upheaval, we see bloody riots break out in the streets of La Paz, with people throwing stones at the presidential palace as they call for the government's downfall. Flashing back a year, we begin to see the events that led to the bloody tragedy. Goni is on the campaign trail, promising to solve Bolivia's devastating economic crisis if he is elected. Behind the scenes are Jeremy Rosner, Tad Devine, and others from the Greenberg Carville Shrum firm, the American advertising experts hired to sell Goni to the people. With unprecedented access to situations that occur all the time in the United States, but which we're never allowed to see, the chronicle follows detailed media coaching with the candidate, secret focus groups, and emergency ad-making sessions that alter the message to fit the moment. Following the journey to its surprising finish, it is a story for our time about Americans trying to spread democracy overseas.

News & Interviews for Our Brand Is Crisis

Burnt Gets Burned
View All

Critic Reviews for Our Brand Is Crisis

Audience Reviews for Our Brand Is Crisis

Our Brand Is Crisis Quotes