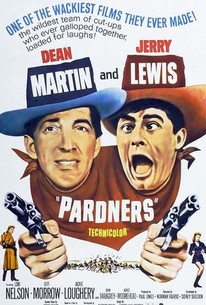 This Dean Martin-Jerry Lewis romp is liberally based on the 1936 Bing Crosby film Rhythm on the Range. Set around 1910, the film stars Lewis as the pampered son of female tycoon Agnes Moorehead. Yearning to return to the Wild West where his father was a famed peacekeeper, Lewis purchases a prize bull, destined for the ranch inherited by rodeo star Dean Martin. It so happens that Martin and Lewis' late fathers were "pardners", so Martin takes it upon himself to protect Lewis from the various and sundry tough hombres in the region. Through a series of bizarre plot convolutions, Lewis gains a reputation as a rootin' tootin' gunslinger, and in his hubris he decides to round up a gang of outlaws headed by Jeff Morrow. As a result, he nearly gets himself blown to smitherines, but Martin shows up in the nick of time to rescue Lewis and help him capture the bad guys. Lori Nelson and Jackie Loughery supply the film's peripheral romantic angle. Pardners ends with Dean Martin and Jerry Lewis turning to the camera and promising that they'll keep on making pictures for their faithful fans; ironically, the team was breaking up even while the cameras were turning.

Bobby Barber
as Townspeople
View All

There are no critic reviews yet for Pardners. Keep checking Rotten Tomatoes for updates!

There are no featured audience reviews for Pardners at this time.