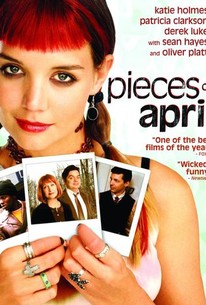 Pieces of April transcends its small-scale setting and budget with endearing performances, playful humor, and genuine sweetness, resulting in a touching holiday treat.

April Burns is a wild, 21-year-old young woman with a very big problem. Against her own better judgment, she's invited her estranged, straight laced family for Thanksgiving dinner. Her boyfriend, Bobby, wants to help, but she banishes him from the apartment while she attempts to cook the meal. To make matters worse, she then discovers that her oven doesn't work. So, while April is forced to ask her eccentric neighbors for help in cooking her fifteen pound turkey, the Burns Family begins a reluctant journey from suburban Pennsylvania toward New York City's Lower East Side. April's Dad, Jim Burns tries to convince the family that the day will be beautiful. However, her mom, Joy, has her doubts and freely voices them. April's teenage sister and brother are squeezed between Grandma Dottie, and a bag of snacks in the back seat, as the Burns' family car hurtles toward Manhattan--and what will most likely be disaster.

Vitali Baganov
as Half Asleep Man

Jamari Richardson
as Boy on Bicycle

Leila Danette
as Woman in Stairwell

News & Interviews for Pieces of April

Critic Reviews for Pieces of April

Audience Reviews for Pieces of April