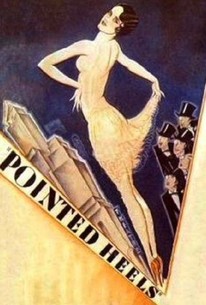 William Powell was still in his tux-and-top-hat period when he starred in Pointed Heels. The scene is Broadway, where millionaire Robert Courtland (Powell) promises to back a new musical production on the proviso that bit player Lora Nixon (Fay Wray) be given a major role. Lora is appreciative but drops out of the show upon falling in love with younger millionaire Donald Ogden (Phillips Holmes). When Donald's mother cuts him off without a cent, Lora shows that she's true-blue after all by returning to the stage to support him. Still quite fond of Lora, Courtland arranges for her latest show, which threatens to be a flop, to become a hit by getting the show's pretentious stars drunk so that their attempts at high drama will be misinterpreted as comedy. Ungrateful Donald mistakenly believes that Lora is having an affair with her benefactor and walks out on his "unfaithful" wife, but with Courtland's help the two sweethearts are reunited at film's end. Pointed Heels was supposed to have been a vehicle for "boop-boop-a-doop" girl Helen Kane, but by the time the film was released, Kane's role was reduced to a supporting part. ~ Hal Erickson, Rovi

There are no critic reviews yet for Pointed Heels. Keep checking Rotten Tomatoes for updates!

There are no featured audience reviews for Pointed Heels at this time.