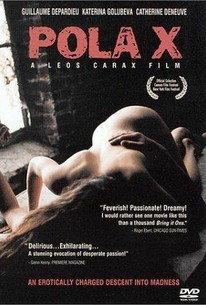 Eight years after Les Amants du Pont Neuf (1991), which failed at the box office, Léos Carax returned with Pola X, a French/German/Swiss co-production with Catherine Deneuve and the young Guillaume Dépardieu in a story of love, incest, and descent into hell. Pierre (Dépardieu) lives with his mother in Normandy, not far from the banks of the Seine River where Victor Hugo's daughter drowned with her lover. The good-looking mother and son are happy, healthy, and wealthy, and they love each other deeply. Pierre is romantically attached to the beautiful and delicate Lucie (Delphine Chuillot) and visits her every morning with the motorcycle he has inherited from his father. One summer night, his mother tells him that she has chosen a date for his wedding. Overexcited, Pierre rushes through the night to break the news to Lucie. As he is speeding down the road, a strange creature with a familiar face suddenly leaps from the dark. She tells him in broken French that she is his sister. Pierre is shocked, but he decides to believe her and make up for the mistake of his father. The film took its inspiration from Herman Melville's Pierre, or, the Ambiguities, which Carax read when he was 18, the same age as the hero of the story. The first part of the film sets an idyllic tone with a fairy tale atmosphere of life among the rich and beautiful. This is in sharp contrast to the world Pierre plunges into when he meets Isabelle (Katerina Golubeva), who claims to be his half-sister. Carax, who has been against nudity in his films, shows the two literally engaging in mutual oral sex onscreen, although this was not included in the original script. (One may insert here that Golubeva, who is known from Sarunas Bartas and Claire Denis films, was the girlfriend of Depardieu in real life.) The fusion of the two leads to the creation of Pierre's book. This is a highly stylized film that is at times reminiscent of German expressionism. It is constructed in opposites: black and white, high and low, good and bad. Elements of fantasy are mixed with reality. Carax tries to introduce a new film language, often at the expense of the emotional quality of the film. Despite its weak points, it is still a work that exhibits the exceptional talent of its director. Golubeva exudes a certain magic in depicting the half-real, half-imaginary character of a vulnerable and somewhat lost Madonna. The title is an acronym of the French title of Melville's book, Pierre, ou, les Ambiguites. The film screened in competition at the 1999 Cannes Film Festival.

Mihaella Silaghi
as The Child

Sharunas Bartas
as The Chief

Miguel Yeco
as Augusto
View All