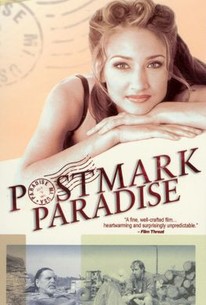 A Russian woman gets an unexpected crash course in small-town American life in this independent comedy drama. Jake (Vincent Angelini) lives and works in Paradise, a small town in southwestern Michigan. Jake is gruff and good-hearted when sober but can be mean-spirited and unpredictable when drunk. His close friend Chick (Randall Godwin) thinks Jake needs a wife, so when he reads a magazine report about Russian women making themselves available as mail-order brides, he poses as Jake to write several letters to an attractive woman from the Ukraine; he also raises money among Jake's friends to bring her to America. Viktoria (Natalia Nazarova) is puzzled by Jake's lack of enthusiasm when she first meets him, and is outraged by his alcoholic discourtesy to her; she storms out and ends up staying with Reenie (Tantoo Cardinal), the no-nonsense barmaid at the local tavern. The next morning, Viktoria realizes that Chick bought her a one-way ticket, leaving her stranded. Reenie takes Viktoria under her wing, giving her a job at the bar while they figure out a way to send her back home. Postmark Paradise marked the feature film debuts for both director Thompson E. Clay and screenwriter Dan Slider; the film was a prize-winner at the 2000 East Lansing Film Festival.

There are no critic reviews yet for Postmark Paradise. Keep checking Rotten Tomatoes for updates!