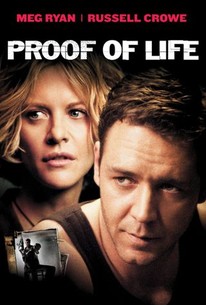 Despite its promising premise and superstar cast, Proof of Life is just a routine thriller that doesn't offer anything new.

A woman whose marriage is in trouble finds herself falling for a new man as her husband's life hangs in the balance in this thriller. Peter Bowman (David Morse) and his wife Alice (Meg Ryan) have relocated to a small Latin American nation called Tecala; Peter works for an American engineering and construction firm, and his latest assignment has him building a dam that is intended to bring power to the developing nation. The ELT is a radical Marxist faction gearing up for political revolution in Tecala that has turned to kidnapping as a way to raise capital, and Peter is chosen as its next target. When Peter is ambushed on his way to work, his firm brings in Terry Thorn (Russell Crowe), a former Australian intelligence operative who now works as a private "kidnapping and ransom" negotiator. Alice is told Terry is her best hope for bringing Peter back safe and sound, but when Terry's employers run into a tight squeeze financially, they cancel their K&R insurance (which is considered a standard benefit for American employees assigned to South America), leaving Alice to rehire Terry on her own, especially since she can't possibly pay the $3 million ransom demanded by the kidnappers. As Terry and his partner Dino (David Caruso) map out a rescue plan, Alice and Terry find themselves increasingly attracted to each other. Alice's marriage to Peter was going through a rough patch when he was kidnapped, and while she's deeply concerned for his safety, she must reconcile her fears for Peter's life with her new feelings for Terry. Proof of Life is based on Adventures in the Ransom Trade, an article by journalist William Prochnau that was published in Vanity Fair, as well as on the case of real-life kidnapping victim Tom Hargrove. ~ Mark Deming, Rovi

Alonso Alegria
as Master of Ceremonies

Yolanda Vazquez
as Notary
View All

Critic Reviews for Proof of Life

Audience Reviews for Proof of Life