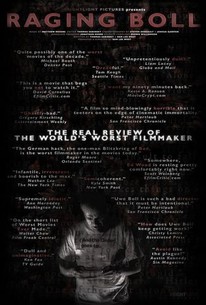 From director Uwe Boll's early video game adaptations (House of the Dead, Bloodrayne) to his later, more serious-minded efforts (Darfur, Stoic), filmmaker (and former crewmember on Boll's films) Dan Lee West focuses on finding out just what motivates the notoriously embattled director to continue making films despite the popular and critical backlash that continually threatens to sink his career. In June, 2006, Boll invited the critics who had bashed his film to step into the boxing ring and defend their reviews with their fists. Had Boll's films not been the target of continuous pummeling by both internet critics and professional film reviewers alike, it would have seemed like a desperate PR gimmick. But despite his reputation as a hack, Boll takes filmmaking very seriously, and this was his chance to fight back. It's just one of the many fascinating chapters in the remarkable career of a filmmaker who, much like Ed Wood before him, pours his entire heart and soul into every project he works on, yet somehow manages to retain his infamous status as one of the worst filmmakers in the history of cinema.

There are no critic reviews yet for Raging Boll. Keep checking Rotten Tomatoes for updates!

There are no featured audience reviews for Raging Boll at this time.