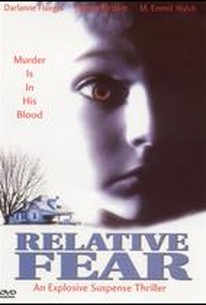 This Canadian thriller features a cute little kid who kills. Connie and Linda give birth simultaneously in the same hospital. A mix up with the babies occur. Linda, after the baby, Adam, hits her, feels something is wrong. Indeed, the babe's real mother is a homicidal maniac and her illness seems to be genetic. Four years pass and Adam has grown into an autistic child. He cannot speak, but he sure can glower when he doesn't get his way. He despises his grandfather because the old man considers him stupid. His parents really love him, but they are concerned. They should be. It is not long before bodies are dropping like flies in the house. The parents hire Clive, a special ed. tutor, to teach Adam to speak. Detective Atwater becomes involved after he begins to suspect that little Adam is behind the mayhem. His mother is inclined to agree. Eventually the mix-up is discovered and Linda confronts Connie, who is chained up in prison. Soon she discovers the whereabouts of her real son. ~ Sandra Brennan, Rovi

There are no critic reviews yet for Relative Fear (The Child). Keep checking Rotten Tomatoes for updates!

There are no featured audience reviews for Relative Fear (The Child) at this time.