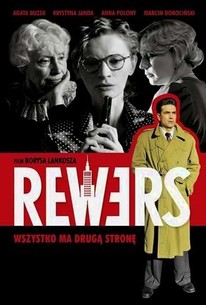 A woman in love learns her man isn't all that she first imagined in this drama set in Poland in 1952. Sabina (Agata Buzek) is a pretty but shy woman who edits poetry for a publishing concern and has just turned 30. Sabina is still single and shares a flat with her mother Irena (Krystyna Janda) and grandmother (Anna Polony); the older women believe Sabina needs to find a husband and soon, but their efforts to find a worthwhile suitor have been fruitless. One night, Sabina is accosted by a handful of toughs, and a burly gentleman named Bronislaw (Marcin Dorocinski) comes to her rescue. While he's rough-hewn and not much of a talker, Bronislaw is genuinely charming and ruggedly handsome, and Sabina quickly falls for him. However, Bronislaw is more than a bit secretive, and not without reason; he's a member of Poland's domestic intelligence bureau, and as Bronislaw and Sabina become closer, she, her mother and her grandmother are all drawn into his double life. Rewers (aka The Reverse) was the first feature film from director Borys Lankosz, and it earned him the Grand Jury Prize for Best New Director at the 2010 Seattle International Film Festival. ~ Mark Deming, Rovi

There are no critic reviews yet for Reverse (Rewers). Keep checking Rotten Tomatoes for updates!

There are no featured audience reviews for Reverse (Rewers) at this time.