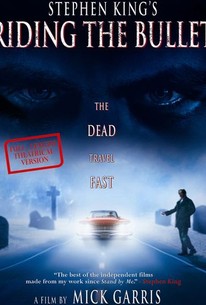 A young man who has flirted with death is forced to come to terms with mortality in this tale of terror based on a story by Stephen King. Alan Parker (Jonathan Jackson) is a college student studying art at the University of Maine in 1969. Cursed with an over-active imagination, Alan constantly obsesses over the worst outcome of any situation, and when he begins to suspect his girlfriend, Jessica (Erika Christensen), is thinking of leaving him, it drives him to the brink of suicide. Shortly after this brush with death, Alan receives word that his mother, Jean (Barbara Hershey), has suffered a severe stroke and may not pull through. Alan grabs his jacket and hits the road, hoping to hitchhike the one hundred miles to the hospital. As it happens, Alan is trying to catch a ride on Halloween night, and after he's picked up by one George Staub (David Arquette), he realizes that he's riding the highway with a creature not of this Earth. Riding the Bullet was directed by Mick Garris, marking the fourth time the filmmaker has brought one of King's stories to the cinema or television screen.

Critic Reviews for Riding the Bullet

Audience Reviews for Riding the Bullet