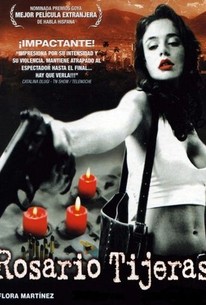 Director Emilio Maille's relentlessly brutal action thriller Rosario Tijeras unfurls in Medellin, Colombia, circa 1989 - a point when that metropolis stood as one of the most relentlessly dangerous, crime-ridden cities on Earth, plagued by the widespread phenomenon of urban drug lords hiring teenage footmen known as sicarios to act as hit men. Flora Martinez essays the title role - a troubled woman with a history of intense, ugly sexual abuse at the hands of male oppressors (both during childhood and after) , who works through her demons by packing firearms and enlisting as a sicario . The position enables her to turn her guns on the world that abused her, and cut a bloody, brutal swath of revenge through Medellin; she gains almost legendary status as a seductive vamp who lures men into a submissive, vulnerable position by kissing them and undertaking her hit during the kiss. The titular name (her nom de guerre ) translates into English as 'Bloody Scissors,' and refers to her particularly ugly and nauseating method of elimination for one particular victim. Screenwriter Marcelo Figueras adapted the novel by Jorge Franco Ramos; Unax Ugalde, Manolo Cardona and Rodrigo Oviedo co-star. Rosario Tijeras reportedly became the second highest-grossing film in Colombian history after it premiered in 2005.