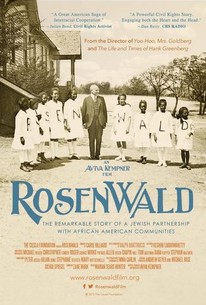 Aviva Kempner's Rosenwald is the incredible story of Julius Rosenwald, who never finished high school, but rose to become the President of Sears. Influenced by the writings of the educator Booker T. Washington, this Jewish philanthropist joined forces with African American communities during the Jim Crow South to build over 5,300 schools during the early part of the 20th century. Rosenwald sheds light on this silent partner of the Pre-Civil Rights Movement. Rosenwald awarded fellowship grants to a who's who of African American intellectuals and artists including: Marian Anderson, James Baldwin, the father and uncle of civil rights leader Julian Bond, Ralph Bunche, W. E. B. DuBois, Katherine Dunham, Ralph Ellison, Langston Hughes, Zora Neale Hurston, Gordon Parks, Jacob Lawrence and Augusta Savage along with Woody Guthrie. Inspired by the Jewish ideals of tzedakah (charity) and tikkunolam (repairing the world) and a deep concern over racial inequality in America, Julius Rosenwald used his wealth to become one of America's most effective philanthropists. Because of his modesty, Rosenwald's philanthropy and social activism are not well known today. He gave away $62 million in his lifetime.

There are no featured audience reviews for Rosenwald at this time.