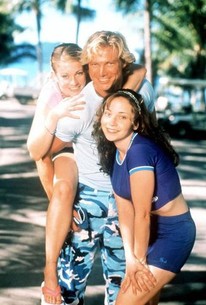 Sabrina Down Under Ratings & Reviews Explanation

Sabrina Down Under Photos

This ABC TV movie was a spinoff of the network's popular sitcom Sabrina the Teenage Witch, with Melissa Joan Hart (who also co-produced) again essaying the title role. This time around, perky witch-in-training Sabrina heads to Australia in the company of her British friend, Gwen (Tara Charendoff). No sooner has the magical heroine arrived than she meets and falls for a muscular merman named Barnaby (Scott Michaelson), who lives in a secret mermaid colony. Motivated by both love and a sense of ecological duty, Sabrina dedicates herself to saving the colony from discovery by a headline-chasing biologist (Peter O'Brien), and from pollution caused by local fat-cat industrialists. Meanwhile, Sabrina's talking cat, Salem (actually a warlock who has been transformed into a cat), embarks upon a romantic adventure of his own with a similarly enchanted female feline named Hillary. Sabrina Down Under was originally broadcast as an episode of ABC's Wonderful World of Disney anthology on September 26, 1999.

Critic Reviews for Sabrina Down Under

There are no critic reviews yet for Sabrina Down Under. Keep checking Rotten Tomatoes for updates!

Audience Reviews for Sabrina Down Under

Sabrina Down Under Quotes