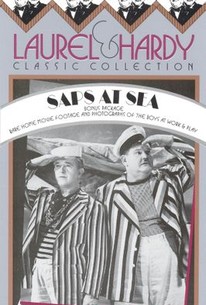 In their last film for Hal Roach, Stan Laurel and Oliver Hardy play employees at the Sharp and Pierce Horn Factory, where the workers tend to go beserk at a rate of one per hour. Driven crazy by the cacophonous G-minor horn, poor Ollie begins to tear the factory apart, screaming "Horns to the left of me! Horns to the right of me! Horns, horns, HORNS!" Sent home to recuperate from his nervous breakdown, Ollie is told by his doctor (James Finlayson) that he is suffering from Hornophobia: "In fact, you're on the verge of Hornomania." Advised to take a restful ocean voyage, Ollie nixes the idea, noting that he hates the high sea. Stan suggests that the two of them rent a small boat and keep it tied up on the dock, so that Ollie can get all the fresh sea air he wants without ever leaving port. Alas, the boys' tiny boat is accidentally set adrift, with Stan, Ollie and escaped killer Nick Grainger (Rychard Cramer) on board. Ordered to prepare breakfast for the ill-tempered Nick, the boys hope to subdue their captor by making him a "synthetic meal": String for spaghetti, soap for cheese, sponge for meatball, lampwick for bacon, and so on. Unfortunately, Nick catches on to their scheme and forces Stan and Ollie to eat the ersatz meal themselves. The boys are finally saved from Nick's wrath when Stan remembers that the sound of trombone will transform Ollie into a fighting demon, but don't count on a completely happy ending when Laurel & Hardy are involved. Cowritten by former comedy great Harry Langdon, Saps at Sea looks more like two or three 2-reelers strung together than a coherent feature film; still, it contains some great gags, most of them taking place in Ollie's apartment, where the plumbing and electrical appliances have been bollixed up by cross-eyed janitor Ben Turpin. Though hardly a classic, Saps at Sea earned Laurel & Hardy some of their best-ever reviews, and would turn out to be their last totally worthwhile feature film.

Charles A. Bachman
as Officer

Constantine Romanoff
as Workman at Horn Factory (uncredited)
View All

Critic Reviews for Saps at Sea

There are no critic reviews yet for Saps at Sea. Keep checking Rotten Tomatoes for updates!

Audience Reviews for Saps at Sea

There are no featured audience reviews for Saps at Sea at this time.