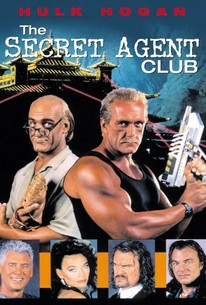 In this family-oriented action comedy, the klutzy demeanor of a large but unassuming toy seller (wrestler Hulk Hogan) is but a facade for a highly skilled, globe-trotting secret agent working for a super-secret peacekeeping operation. His son Jeremy knows only that he doesn't get to see his dad very often as he is often away on "business trips." As his mother died years ago, this is especially difficult for the boy. One day, his father brings home a new type of laser gun he swiped from a pretty foreign arms dealer. He tells Jeremy that it's just a new kind of toy, but his secret finally comes out when the arms dealer sends her henchmen to retrieve it. His father is captured, but Jeremy escapes with the laser gun. With practice, he learns the truth about its uses and becomes an expert shot with it. To save his dad, he enlists the aid of some good friends and together they hatch an ingenious rescue.

Allison Bibicoff
as Woman in Bleachers

Lesley-Anne Down
as Eve

Brian Yandrisovitz
as Umpire
View All

There are no critic reviews yet for The Secret Agent Club. Keep checking Rotten Tomatoes for updates!