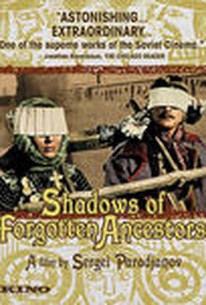 Along with Tarkovsky and Dovzhenko, Sergei Paradjanov is one of the most important Soviet directors of last century. Paradjanov, who was periodically jailed and exiled because of his work, stunned world audiences in 1964 with his Shadows of Our Forgotten Ancestors, popularly known as the Romeo and Juliet of the Carpathians. The film is set among the Hutsul people of the Western Ukraine, an isolated ethnic group who live in the upper reaches of the mountain range. Their lives take place within a harsh environment and an ornate cultural system little changed since the 18th century. The film opens with the deaths of Ivanko's brother, Olexa, crushed by a tree, and father, Pyotr Pavlichuk, killed outside of church by his rich neighbor Guteniuk. During the funeral procession for his father, Ivanko meets Guteniuk's daughter, Marichka, and the stage is set for the star-crossed lovers. Structured episodically, the film checks in with Ivanko and Marichka as they fall in love and age towards adulthood. Finally of an age to marry, Ivanko finds himself unable, having been reduced to poverty by his father's death. Forced to work as a hired hand, he must leave his village and his beloved Marichka. Tragedy ensues and the remainder of the film concerns Ivanko's private and subtle dissolution as a result of this tragedy. ~ Brian Whitener, Rovi

There are no featured audience reviews for Shadows of Forgotten Ancestors (Tini zabutykh predkiv) at this time.