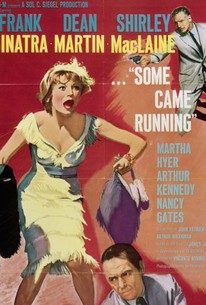 After the success of From Here to Eternity, pairing Frank Sinatra with another James Jones novel made perfect sense. Set in the aftermath of World War II, the film stars Sinatra as a recently discharged soldier whose promising writing career has derailed. After a drunken card game, Sinatra finds himself aboard a bus for his Indiana hometown of Parktown, with recent acquaintance Shirley MacLaine in tow. An unrefined good-time girl, MacLaine allows her affections to settle on the hard-drinking Sinatra, who wants little to do with her as he reluctantly sets about re-establishing ties he thought to have abandoned over a decade before. These include a brother (Arthur Kennedy) unable to discard his salesman's persona, his disapproving wife (Leora Dana), and their teenage daughter (Betty Lei Keim). Meanwhile, Sinatra makes a variety of new acquaintances both respectable and otherwise, including a local gambler (Dean Martin) and a creative writing instructor (Martha Hyer) smitten with his writing and possibly with him. Shaking up the complacency of his small hometown more by accident than design, Sinatra forces all those around him to reevaluate their behavior. After a variety of smaller parts, this is the role that cemented MacLaine's name, earning her an Oscar nomination for Best Actress. ~ Keith Phipps, Rovi

News & Interviews for Some Came Running

Critic Reviews for Some Came Running

Audience Reviews for Some Came Running