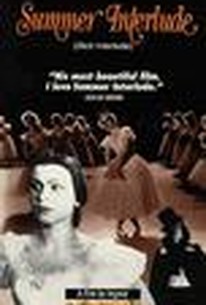 In this melancholy romance, a not-so-young ballerina recalls an earlier, tragic love affair. The heroine, Marie (Maj-Britt Nilsson), spends a summer with her possessive Uncle Erland (Georg Funkquist), who lives with his cancerous wife on an island near Stockholm. While staying with her uncle, who may have intimidated her into a sexual relationship, Marie befriends an innocent youth, Henrik (Birger Malmsten), with whom she soon falls in love. As the glorious summer comes to an end and autumn approaches, harkening Marie's return to the mainland and her dancing career, the lovers express their love to each other. But a fatal swimming mishap brings an end to the affair. Marie continues with her life, but she fails to come to terms with the tragic past. Later, Marie receives the diary that she kept during that memorable summer. She thereupon returns to the island, where she again meets her ghoulish Uncle Erland. Repulsed by his cynicism, Marie determines to recover her joy of living. She returns to Stockholm and shares the diary with her lover, a smarmy journalist (Alf Kjellin). In the concluding scene, she expresses her regained exuberance while dancing. A pivotal film in Ingmar Bergman's oeuvre, Sommarlek marked his maturation as a master filmmaker capable of evocative imagery and poignant expression. Of particular note are the unsettling scenes between Marie and her ominous uncle, framed and lit to emphasize the disturbing nature of their relationship. Maj-Britt Nilsson's performance as Marie is also remarkable, enhanced by Bergman's increasing mastery of the close-up. The splendid achievement of Sommarlek signalled a long succession of masterworks that ensued until Bergman's withdrawal from filmmaking in the 1980s. ~ Les Stone, Rovi

Annalisa Ericson
as Kaj a ballerina

John Botvid
as Karl a janitor

Douglas Håge
as Nisse a janitor

Ernst Brunman
as The Captain

Julia Cæsar
as Maja a dresser

Gunnar Olsson
as The Priest

Olaf Riego
as The Doctor

Carl Stroem
as Sandell
View All