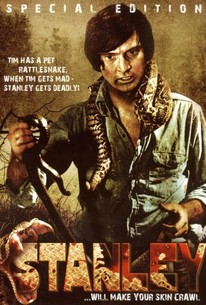 A Seminole Indian and Vietnam veteran suffering from post-traumatic stress syndrome uses his cold-blooded companions to seek vengeance against the people who killed his father in this horrific frightener from director William Grefe. Tim Ochopee (Chris Robinson) has been deeply scarred by his battlefield experiences. Upon finishing his tour of duty and returning to his home in the Everglades, all Tim wants is to live peacefully in the wilderness with his pet snake "Stanley." Upon discovering that his father has been killed under suspicious circumstances, however, Tim finds Stanley a mate and begins breeding the pair. Before long, Tim has a shack full of hungry snakes just waiting for a decent meal. That meal comes when Tim decides to sick his slithering friends in slimy snakeskin manufacturer Richard Thompkins (Alex Rocco). Infuriated that Tim would refuse his offer to purchase the snakes and transform them into tacky apparel, Thompkins hires a psychotic hitman (Paul Avery) to put the snake-loving vet in the ground. But Thompkins and his volatile gun for hire have underestimated the unusual bond that Tim shares with his snakes. Now, as Tim and his serpents come out to play, the poison begins to flow and the screaming starts.

Bill Marquez
as Wauchula
View All

There are no critic reviews yet for Stanley. Keep checking Rotten Tomatoes for updates!