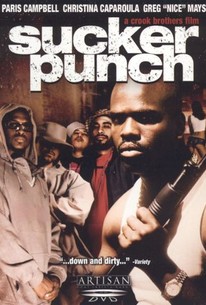 Mike (Paris Campbell) feels bad about the way he earns his money, conning and drugging runaway girls to get them to his boss, the sleazy pimp, Lamar (Will Sierra), and Lamar's vicious enforcer, Ivan (Lev Gorens). Mike is also a drug addict, and he's in love with one of Lamar's prostitutes, the hardened Rhonda (Christina Caparoula), who thinks he's a loser, and will only consider having sex with him for money. Lamar suspects Mike of stealing from him, he sends two corrupt cops, Dibbs (rapper Greg Nice) and Maroni (Jason Madera), out to deal with him. They beat Mike, stab him, and leave him lying for dead in the street. A young Christian couple, Kelly (Angela Grant) and Don (Kohl Norville), find Mike and get him to the hospital, where he is miraculously revived. Mike recovers with a newfound fear for his immortal soul. He gets a job, gives up crack, and begins reading the Bible and attending church with Kelly and Don. But he still loves Rhonda, and desperate to get her out of "the life," he tells her about the money he stole from Lamar. Rhonda betrays him, and Lamar decides that rather than just kill Mike, he'll destroy his soul. Suckerpunch marks the feature debut of writing and directing team Jeff and Josh Crook. It features music from Greg Nice, Pete Rock, Leaders of the New School, and the Beatnuts, whose Juju and Psycho Ray also act in the film. Suckerpunch was shown at the 2002 Urbanworld Film Festival.

Will Sierra
as Lamar

Jason Madera
as Maroni
View All

There are no critic reviews yet for Sucker Punch. Keep checking Rotten Tomatoes for updates!

There are no featured audience reviews for Sucker Punch at this time.