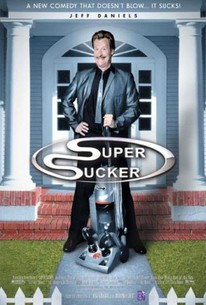 Clean carpets and dirty minds find a common ground in this comedy written, directed, produced, and distributed by leading man Jeff Daniels. Fred Barlow (Daniels) is a hapless door-to-door salesman who scrapes together a living selling and distributing the Super Sucker Home Cleaning System, a deluxe vacuum cleaning unit, in the small Michigan community of Johnson City. While Barlow and his dedicated but inept staff believe in their product, they don't have much luck in actually moving the merchandise, and hotshot fellow distributor Winslow Schnaebelt (Harve Presnell) is eager to take over Barlow's territory. Super Sucker prexy Cy Suckerton II (John Lepard), tired of the squabbling between Barlow and Schnaebelt, decides to settle the matter once and for all with a contest -- whoever sells the most vacuums in 30 days will have all of Johnson City to themselves. Barlow and his right-hand-man Howard Butterworth (Matt Letscher) try to gear up their staff to make an all-out sales assault on Johnson City, but it turns out that the deciding factor may well be the "Housewife's Little Helper," a little-used vacuum attachment for "cleaning those hard-to-reach places" which Barlow discovers has a surprising use that has nothing to do with sweeping the rug. Super Sucker also features a guest appearance by Dawn Wells (Mary Ann from Gilligan's Island) as the official Super Sucker spokesperson; longtime Bob Seger sideman Alto Reed contributed to the film's soundtrack.

Dawn Wells
as Herself

John Seibert
as Boy on Bike

Will Young
as Clifford
View All

There are no featured audience reviews for Super Sucker at this time.