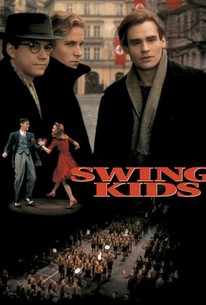 In 1939 Hamburg, Germany, a group of teenagers express their rebellion against Adolph Hitler's Nazi regime through their affection for American swing music, British fashion, and Harlem slang. American and British big-band jazz records are among those banned by the Fuhrer, but the young men secretly get together with their friends to listen and dance to the music. As their escapades become increasingly bold, they each get into trouble with the authorities. Robert Sean Leonard stars as Peter, who ends up being forced -- by a prank -- into having to join the Hitler Youth with his friend Thomas (Christian Bale). They are both engineering students at the university, where Thomas' father was taken away for defending his Jewish colleagues. With Arvid (Frank Whaley), they pretend to be Nazi supporters by day while rebelling with the swing music by night. Kenneth Branagh, in an uncredited appearance, is a glib Nazi Gestapo chief who makes matters more difficult. Each of the boys must choose among family, safety, friendship, and freedom as politics impinges on their youthful exuberance, and the Nazis set them against one another. The movie was shot in Prague, directed by Thomas Carter from a script by Jonathan Marc Feldman, and released by Disney. Barbara Hershey appears as Peter's mother.

Petr Jakl
as Policeman in Marketplace

Metin Yenal
as Customer in Bookshop

John Duval
as Gestapo With Ashes

Eliza Clark
as Girl with Ashes

Kate Buffery
as Woman With Ashes