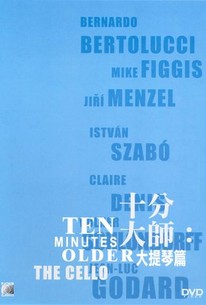 Eight master directors of world cinema combine forces for this omnibus film that focuses cumulatively on the subject of time. Bookended by cello interludes, Ten Minutes Older: The Cello presents just one parameter to each of its filmmakers: no final entry can be more or less than ten minutes long. The resulting films run the gamut of styles and moods, beginning with Bernardo Bertolucci's Histoire d'Eaux, which presents an Indian fable about a mentor's impatience. In Mike Figgis' entry About Time 2, the director continues with the experimental structure he pioneered in Timecode; similarly, Jean-Luc Godard uses his time allotment to present a fractured series of clips on youth, death, and love. Another non-narrative entry, Volker Schlöndorff's The Enlightenment presents a series of images on racism. Claire Denis' effort Vers Nancy chronicles a philosophical discussion on time between a teacher and student on a train ride; in Jirí Menzel's Ten Minutes After, the effects of time on aging Czech actor Rudolf Hrusinsky are documented. In perhaps the film's most narrative-oriented segment, director Michael Radford offers up a sci-fi vision of an astronaut returning to earth to find that his son has aged faster than he has. Ten Minutes Older: The Cello is a companion piece to 2002's Ten Minutes Older: The Trumpet, which aired in the U.S. on the Showtime cable network.

There are no critic reviews yet for Ten Minutes Older. Keep checking Rotten Tomatoes for updates!

There are no featured audience reviews for Ten Minutes Older at this time.