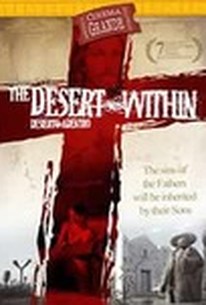 The Desert Within Ratings & Reviews Explanation

The Desert Within Photos

A spiritual journey takes a strange and disturbing turn in this drama from Mexican filmmaker Rodrigo Pla. In 1928, Mexico is in a state of political overthrow, with government forces reacting with savage violence against anyone they imagine may harbor revolutionary sympathies. After Elias (Mario Zaragoza) and his wife become parents of a baby boy, their attempt to travel into town to have the child baptized is mistaken for the advance of rebel troops, and soon their village is raised by military police. As Elias and his family run for their lives, he is visited by a vision of the Lord, who condemns him for putting his children and neighbors in harm's way, and Elias is convinced he must atone. Elias leads his family into the desert and he begins building a church, convinced this is the only way he can redeem his family in the eyes of God. But it soon becomes obvious Elias's children do not share his convictions, and the father's devotion begins to resemble madness. Desierto Adentro (aka The Desert Within) was an official selection at the 2008 Guadalajara Film Festival. ~ Mark Deming, Rovi

Critic Reviews for The Desert Within

There are no critic reviews yet for The Desert Within. Keep checking Rotten Tomatoes for updates!

Audience Reviews for The Desert Within

There are no featured audience reviews for The Desert Within at this time.

The Desert Within Quotes