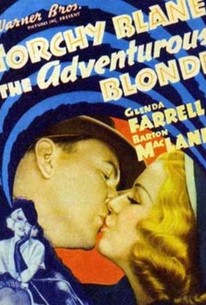 In their third crime-solving adventure, smart-aleck newspaper woman Torchy Blane (Glenda Farrell) and slightly dense homicide dick Steve McBride (Barton MacLane) are about to get hitched when Torchy's reporter friends pull a practical joke on them. As a wedding present, the harebrained newsboys hire a stage actor, Harvey Hammond (Leland Hodgson), to simulate a murder victim. But when Torchy and Steve arrive at the scene of the supposed crime, Hammond has been killed for real. Suspects, of course, abound, including Hammond's fellow thespians Hugo Brand (Anderson Lawlor) and Grace Brown (Anne Nagel), whose romance the actor had tried to destroy. Even more suspicious to Torchy are Hammond's long-suffering wife (Virginia Brissac), and his socialite mistress (a surprisingly brunette Natalie Moorhead). With little help from Steve and his even dumber sergeant, Gahagan (Tom Kennedy), Torchy sets a trap for the killer. Produced by Warner Bros.'s busy B-unit, The Adventurous Blonde was acted at breakneck speed by a justly famous stock company, who, as always, nearly managed to make a hackneyed plot seem fresh and new. Torchy herself was ostensibly based on reporter Dorothy Kilgallen and had begun her crime-solving career in Smart Blonde (1937). Eight more Torchy films were made, but Farrell and MacLane were replaced by Lola Lane and Paul Kelly in Torchy in Panama (1938), the seventh entry, and by Jane Wyman and Allen Jenkins in the final, Torchy Plays With Dynamite (1939). By then, then series had more than run its course. ~ Hans J. Wollstein, Rovi

Critic Reviews for The Adventurous Blonde

There are no critic reviews yet for The Adventurous Blonde. Keep checking Rotten Tomatoes for updates!

Audience Reviews for The Adventurous Blonde

There are no featured audience reviews for The Adventurous Blonde at this time.