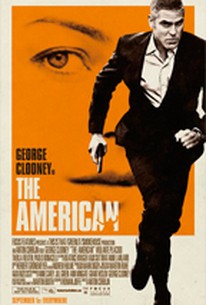 As beautifully shot as it is emotionally restrained, The American is an unusually divisive spy thriller -- and one that rests on an unusually subdued performance from George Clooney.

Story: Academy Award winner George Clooney stars in the title role of this suspense thriller. As an assassin, Jack is constantly on the move and always alone. After a job in Sweden ends more harshly than expected for this American abroad, Jack retreats to the Italian countryside. He relishes being away from death for a spell as he holes up in a small medieval town. While there, Jack takes an assignment to construct a weapon for a mysterious contact, Mathilde (Thekla Reuten). Savoring the peaceful quietude he finds in the mountains of Abruzzo, Jack accepts the friendship of local priest Father Benedetto (Paolo Bonacelli) and pursues a torrid liaison with a beautiful woman, Clara (Violante Placido). Jack and Clara's time together evolves into a romance, one seemingly free of danger. But by stepping out of the shadows, Jack may be tempting fate.-- (C) Focus

Giorgio Gobbi
as Man on Vespa

News & Interviews for The American

Critic Reviews for The American

Audience Reviews for The American