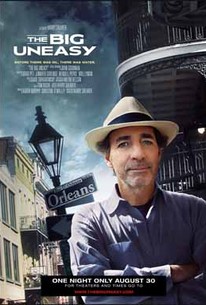 The Big Uneasy offers an admittedly uneven - yet still worthy and well-intentioned - look at a horrific disaster's aftermath.

Almost five years ago, a disaster struck New Orleans. The media said it was a natural disaster primarily affecting poor black people. On both counts, the media was wrong. In his feature-length documentary The Big Uneasy, humorist and New Orleans resident Harry Shearer gets the inside story of a disaster that could have been prevented from the people who were there. As we approach the fifth anniversary of the flooding of New Orleans, Shearer speaks to the investigators who poked through the muck as the water receded and a whistle-blower from the Army Corps of Engineers, revealing that some of the same flawed methods responsible for the levee failure during Katrina are being used to rebuild the system expected to protect the new New Orleans from future peril. In short segments hosted by John Goodman, Shearer speaks candidly with local residents about life in New Orleans. Together, they explore the questions that Americans outside of the Gulf region have been pondering in the five years since Katrina: Why would people choose the live below sea level? Why is it important to rebuild New Orleans? The Big Uneasy is laced with computer imagery that takes you inside the structures that failed so catastrophically, and boasts never-before-seen video of the moments when New Orleans began to flood and the painstaking investigations that followed. The Big Uneasy marks the beginning of the end of five years of ignorance about what happened to one of our nation's most treasured cities - and serves as a stark reminder that the same agency that failed to protect New Orleans still exists in other cities across America. In Theaters August 30th, One Night Only -- (C) Official Site

News & Interviews for The Big Uneasy

Critic Reviews for The Big Uneasy

Audience Reviews for The Big Uneasy

There are no featured audience reviews for The Big Uneasy at this time.