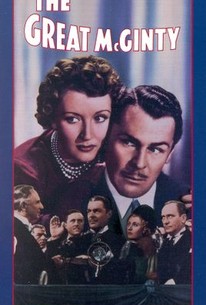 The moral of Preston Sturges' first directorial effort The Great McGinty seems to be: If you're a crook, stay a crook, because honesty will get ya every time. Brian Donlevy plays Dan McGinty, a Chicago hobo who is hired by local political bosses as a "professional voter", casting ballots under a variety of assumed names in various districts. McGinty chalks up $74 worth of votes, and when local ward heeler William Demarest can't pony up, McGinty takes direct action by trying to beat up The Boss (Akim Tamiroff). Though the two men can't get through an entire day without trying to kill each other, McGinty and the Boss are impressed by each other's raw abilities and become political partners. Through the Boss' patronage, McGinty works his way up to the mayor's office, with his politically expedient bride (Muriel Angelus) at his side. Though he never goes so far as to fall in love with his "arranged" wife, Donlevy is fond of both her and her children by a previous marriage, and for their sake he begins to reform--much to the dismay of the Boss. With the Governor's mansion within his grasp, McGinty makes the fatal error of fessing up to a graft-ridden bridge contract. It is this impulsive moment of honesty, rather than any of his past crimes, that gets McGinty thrown in the slammer, sharing a cell with the blood-in-his-eye Boss. Demarest separates the two combative men long enough to arrange an escape to South America, but not before McGinty has assured the financial security of his wife and family. The story is told in flashback form in a seedy South American dive, where McGinty works as a bartender and the Boss is the manager. The film ends with the two friendly enemies duking it out over a minor infraction, while bouncer Demarest looks on in disgust. Sick to death of watching other directors mangle his screenplays, Preston Sturges sold this rollicking political satire to Paramount only on the condition that he be allowed to direct (for the princely sum of $10). Paramount hedged its bets by giving Sturges a slim budget and inexpensive stars; as a result, the film made back its cost several times over, and Preston Sturges' directorial career was off and running.

Akim Tamiroff
as The Boss

William Demarest
as The Politician

Harry Rosenthal
as Louis, the Bodyguard

Steffi Duna
as The Girl

Frank Moran
as The Boss' Chauffeur

Jimmy Conlin
as The Lookout

Critic Reviews for The Great McGinty

Audience Reviews for The Great McGinty