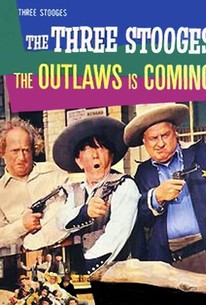 The Outlaws Is Coming!

The Outlaws Is Coming! Photos

The Three Stooges (Moe Howard, Larry Fine, and Curly Joe De Rita) leave Boston for the Wild West when they are fired from the Society for the Preservation of Wildlife. With Eastern editor Kenneth Cabot (Adam West), the boys find themselves in lawless Wyoming and the target of every infamous gunslinger of the era. With help from Annie Oakley (Nancy Kovak), the Stooges and Cabot fight the likes of Billy the Kid, Johnny Ringo, Jesse James, Cole Younger, and the Dalton Gang, and soon Wild Bill Hickok and Bat Masters arrive in a blaze of bullets. Watch for longtime Stooges foil Emily Sitar in a triple role as Aberrant, a U.S. cavalry Colonel, and the Witch Doctor, with Henry Gibson as Charlie Horse, and Murray Alper as Chief Crazy Horse. Ellwood Ullman provides the screenplay from the story by director Norman Maurer, Moe's son-in-law. With character names like the Sunstroke Kid and Trigger Mortis, this last of the Stooges feature films ranks among the best. Annie has a fight in the middle of town with Belle Starr (Sally Starr), and the cowardly editor Cabot proves his bravery and falls for his heroine Annie. Years later in a tribute to history's longest running comedy trio, Adam West fondly remembered his experience in making The Outlaws Is Coming with the Stooges. West would score his biggest career plume with the television series Batman, but he was obviously in awe of working with Larry, Moe, and Curly Joe.

Johnny Ginger
as Billy the Kid

Critic Reviews for The Outlaws Is Coming!

Audience Reviews for The Outlaws Is Coming!

There are no featured audience reviews for The Outlaws Is Coming! at this time.

The Outlaws Is Coming! Quotes