The Price of Milk 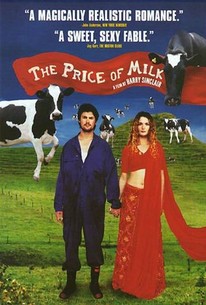 The Price of Milk

Awash in random whimsy, The Price of Milk feels more forced and muddled than charming.

The Price of Milk Photos

New Zealand filmmaker Harry Sinclair turns to a more rural setting with this modern fairy tale centering on two lovers, Lucinda ($Danielle Cormack) and Rob (Karl Urban), who live on a dairy farm in a quaint small town. On a standard errand one day, Lucinda accidentally hits an older woman on the road. The woman miraculously gets up unharmed and disappears, but soon afterward, Lucinda starts incorporating her fears into her current romantic relationship. In an effort to restore their romantic lives to a more exciting plane, Lucinda begins creating small conflicts on the advice of friend Drosophila (Willa O'Neill), hoping for instant results. One night, however, Rob and Lucinda are robbed by a Maori group, later revealed to be the nephews of the woman stricken in the car accident. The group steals a quilt, which Lucinda barters 117 of Rob's farm cows to get back. Meanwhile, Drosophila has attempted to steal Rob for herself, and Lucinda's plans turn out to work against her. Director Sinclair reportedly developed the story as an outline, with many elements devised as the film progressed during shooting.

Critic Reviews for The Price of Milk

Audience Reviews for The Price of Milk

There are no featured audience reviews for The Price of Milk at this time.

The Price of Milk Quotes