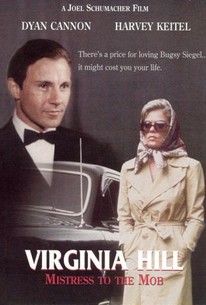 Long before the Warren Beatty/Annette Bening vehicle Bugsy (92), Harvey Keitel portrayed gangster Bugsy Siegel and Dyan Cannon costarred as Siegel's mistress Virginia Hill in the made-for-TV The Virginia Hill Story. Told in flashback, the film traces Virginia's life from the time she takes up with Bugsy; we see Siegel's takeover of the Las Vegas gaming tables and his eventual death at the hands of his mob rivals. The flashback is bookended by Virginia's 1951 testimony before the Kefauver Committee. The film's attention to period detail does not extend to its "revisionist" dialogue, but it's gratifying to see the often ill-used Dyan Cannon in a worthwhile role. Harvey Keitel is alternately sinister and sensual as Siegel, while Herbert Anderson (the immortal Henry Mitchell from the old Dennis the Menace series) is the living image of Estes Kefauver. A note worth noting: The Virginia Hill Story premiered the same November week in 1974 as the network debut of The Godfather (1972).

There are no critic reviews yet for The Virginia Hill Story. Keep checking Rotten Tomatoes for updates!

There are no featured audience reviews for The Virginia Hill Story at this time.