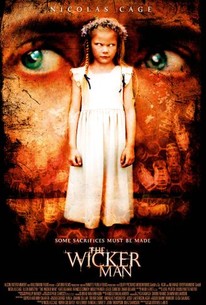 A young child has gone missing and it's up to a haunted but determined policeman to travel to the remote island community where she was last seen and solve the lingering mystery of her disappearance in director Neil LaBute's updated reworking of Anthony Shaffer's 1973 cult horror classic. Upon receiving a letter from his one-time fiancée, Willow (Kate Beahan), imploring him to search for her missing daughter on the secluded island of Summersisle, Policeman Edward Malus (Nicolas Cage) quickly makes his way to the island to locate the girl and seek an answer as to why Willow suddenly and inexplicably disappeared shortly before their wedding date. Once there, Malus is troubled to discover that although there are traces of the child to be found in such locations as the local schoolhouse, the residents of Summersisle seem reluctant to offer any specific details as to the girl's apparent death. His investigation effectively stalled by the highly secretive Wiccan community, Sheriff Malus soon discovers that there are still some cultures that have their own unique beliefs about humankind's relationship with Mother Earth, and refuse to adapt to the rules of modern society. ~ Jason Buchanan, Rovi

Xantha Radley
as Village Sister No. 1

Tania Saulnier
as Attendant No. 1

Anna Van Hooft
as Attendant No. 2

Moraea Bieber
as School Girl No. 1

Jayda Bieber
as School Girl No. 2

Talia Ranger
as School Girl No. 3

Simon Longmore
as Village Male No. 1

Andre Danyliu
as Village Male No. 2

Jacqueline Robbins
as Blind Twin No. 1

Joyce Robbins
as Blind Twin No. 2

James Franco
as Bar Guy No. 1

Jason Ritter
as Bar Guy No. 2

News & Interviews for The Wicker Man

Critic Reviews for The Wicker Man

Audience Reviews for The Wicker Man