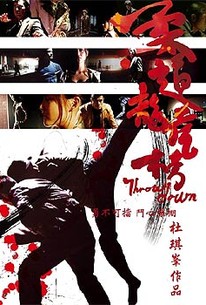 A man who gave up on himself is redeemed by new and unexpected challenges in this drama from Hong Kong filmmaker Johnny To. Sze-To (Louis Koo) was once a respected judo champion, but he became jaded and lost interest in the sport. Now, Sze-To is an alcoholic who runs a night club and wastes his spare time by spending a massive bankroll he stole from a rival in fight promotion on gambling and liquor. When Sze-To learns that the judo master who was his mentor and teacher has died, it knocks a hole in the wall of booze and despair he's built around himself, and soon two new challenges present themselves. Mona (Cherrie Ying) is an aspiring singer trying to break away from her overly controlling father who arrives at Sze-To's club looking for a gig -- and won't go away until she gets one. And Tony (Aaron Kwok) is a young martial arts prodigy who has heard of Sze-To's former skills in the judo ring; eager to test his skills against a true master, Tony challenges Sze-To to a match, encouraging Sze-To to begin familiarizing himself again with the art of the gentle way.

Cherrie In
as Mona

Critic Reviews for Throw Down

Audience Reviews for Throw Down