Towed in a Hole 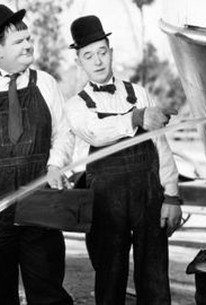 Towed in a Hole

Towed in a Hole Photos

This is one of Stan Laurel and Oliver Hardy's most popular two-reelers; it's particularly rich in gags, well-structured, and is a hilarious illustration of the chemistry that brought the duo its fame. It begins with Stan and Ollie as fish salesmen, and doing very well at it too. Then Stanley comes up with the idea of catching the fish themselves and cutting out the middleman. Ollie does him one better by deciding to buy a boat instead of merely a couple of fishing poles. The first sign of trouble (other than the fact that the two have been thinking to begin with) is that the boat they buy comes from a junkyard. Clearly disaster is waiting to happen, and it does, right on schedule. The boys fill the boat up with water to find leaks and the two of them wind up thoroughly drenched. Ollie gets more paint on himself than on the boat. He and Stan bicker throughout until Ollie points out that here they are, "two grown-up men acting like a couple of children," which, of course, is the charm of Laurel and Hardy comedies. By the end of the film, both the boat and the boys' car are wrecked. The only thing that is still in one piece is an obnoxious-sounding horn belonging to Stan. This was the last Laurel and Hardy picture directed by George Marshall (his others were Their First Mistake and Pack Up Your Troubles). Marshall left Hal Roach's studio because of budget cuts, but went on to an illustrious career that included features such as You Can't Cheat an Honest Man, Destry Rides Again, and The Blue Dahlia.

Critic Reviews for Towed in a Hole

Audience Reviews for Towed in a Hole

Towed in a Hole Quotes