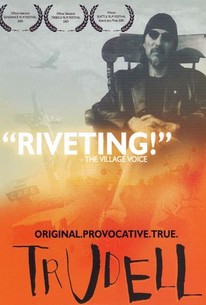 John Trudell has led a fascinating life -- unfortunately, Trudell the documentary largely fails to translate it into a compelling viewing experience.

John Trudell is a poet, musician, actor, and political activist who has been speaking out on behalf of the Native American people with intelligence and passion since the late '60s. Trudell took part in the 1969 occupation of Alcatraz Island by the activist group Indians of All Tribes, who intended to use the former prison as a school for Native American youth. Trudell eventually became one of IOAT's leading spokesmen, and in 1973 became chairman of the American Indian Movement (AIM), which would become the most visible and powerful Native American activist group. In 1979, not long after a protest in which Trudell and other AIM members burned an American flag in front of FBI headquarters, his wife, mother-in-law, and three daughters died in a fire. Some have suggested that the fire was an arson set by FBI operatives (the Bureau has a 17,000 page file on Trudell, in which he is described as "extremely eloquent, therefore extremely dangerous"). Trudell turned to poetry to help him express his grief over the death of his family and his concerns over the state of America; musician Jackson Browne admired his writings, and encouraged him to put his words to music, and with the help of collaborators such as Jesse Ed Davis and Mark Shark, Trudell began recording a series of albums which combined lyrics confronting political and personal issues with music that touched on blues, rock, and Native American themes. Well into the new millennium, Trudell remains a powerful voice in both political and creative circles, and Native American filmmaker Heather Rae spent 12 years following Trudell and interviewing him, his friends, and his colleagues to create the documentary Trudell. Created with Trudell's participation and approval, the film won the Special Jury Prize as Best Documentary at the 2005 Seattle Film Festival.

There are no featured audience reviews for Trudell at this time.